Performance of Tilt! at the University of Guelph, 2008
Photos by Julian Katz

Tilt!
Text by Lawrie Crawford and music by Owen Bloomfield

Yukon writer Lawrie Crawford explores the angst and craziness of living in the extremes.  The perpetual darkness or light of the arctic and living at the top of a spinning object play an important part in the poetic and musical language as well as movement of  Tilt!  Central to the piece is a character who on the surface is dealing with the extremes of daylight and darkness North of 60.  Circling the character are the other performers representing his thoughts, perceptions and/or decisions.  The piece is scored for actor, soprano, wind instrument and piano. 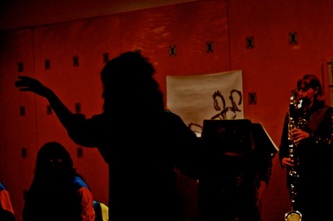 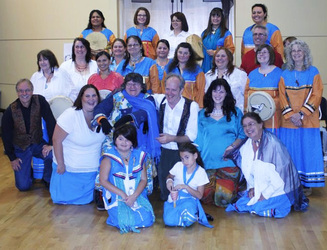 Songs of Sky Woman brings together the interdisciplinary group SlanT and the Indigenous drum group Mino Ode Kwewak N'gamowak in an exploration of cultural convergence.  This collaborative work weaves together original contemporary music by Peter Skoggard and traditional Aboriginal music with the intention of fostering cultural understanding through performance art.

Scored for soprano, bass clarinet, piano and storyteller, Skoggard has chosen texts by three inspiring Native Canadian authors to tell a story from legendary beginnings to the personal and the contemporary.  The work begins with text from King's acclaimed novel Green Grass, Running Water, which looks at the mythology of creation in a most insightful and amusing way.  The poetry of the two Anishinabek women includes recurring elements of water with images of reconciliation, healing and convergence.

Songs of Sky Woman was developed during a three-day workshop at the Cambridge Centre for the Arts, which culminated with a public performance on Oct. 16, 2011.  In place of admission, the audience donated generously to the KW Urban Native Wigwam Project.  SlanT is extremely grateful to the Region of Waterloo Arts fund for making the creation of Songs of Sky Woman possible, and also to the Cambridge Centre for the Arts for donating the space and staff for the project. 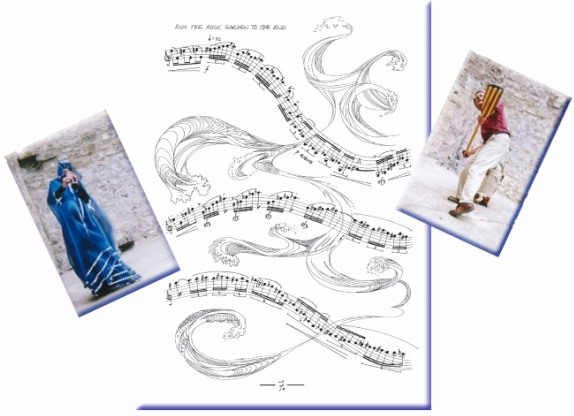 Poem by Rae Crossman and music by R. Murray Schafer

From the Bow is an interdisciplinary work that incorporates a poem by Rae Crossman and clarinet music written for Tilly Kooyman by renowned Canadian composer R. Murray Schafer. Presented dramatically, the poet/actor (Rae) illustrates the story of a father and son's canoe journey using stylized paddling movements. Sometimes the paddle is a paddle, sometimes it's a fishing rod, a log tumbling in rapids, or the thwart of a canoe. Integral to the performance is Schafer's clarinet music that suggests a swirling whirlpool, rapids, or calm water. Masked and costumed, the clarinetist (Tilly) incorporates choreography that simulates the changing flow of the river as expressed in the music. The performance also includes a display of the score that Schafer has strikingly rendered based on Rae's poem.

Commissioned with the assistance of a Region of Waterloo Arts Fund grant, From the Bow was premiered at the International Narrative  Matters conference in Nova Scotia in 2006 with support from the Canada Council.  Other performances include:  International ClarinetFest in Vancouver, Peterborough's Bright Light series, Forest Festival in Haliburton Forest, Soundstreams Canada, Open Ears Festival, Stratford Summer Music and numerous other events. Both poem and score have been published in the nationally acclaimed literary magazine The New Quarterly, as a confluence of word, music, and image.

For soprano and clarinet
Rhyming Scheme is a playful piece with a slightly dark edge.  It revels at the play of words in traditional nursery rhymes with a hint at lost innocence.  The singer and the clarinetist interact theatrically in a direct conversation and game play throughout the piece.

For soprano and piano, commissioned by the Eckhardt-Gramatté National Music Competition with the assistance of the Eckhardt-Gramatté Foundation, the song cycle Autumn (1993) consists of three short songs to texts by the composer. The first song, Alba, is an impression of the mystery and the grandeur of an autumn dawn. The second, Aspects of Rain, is a playful patter song with a tongue-twisting text that is a catalogue of onomatopoeic words suggesting rain. The third song, Twilight, is a nostalgic evocation of the power and the sorrow of memory.

For actor, soprano, electronics
Trio challenges the conventions of what is solo, what is accompaniment, and the audience's expectations of a traditional performance.
"Music meets theatre with a vengeance."    The Record

Excerpt from a poem by Rae Crossman 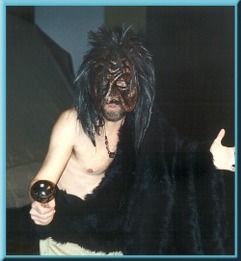 rattle of seeds
and shards of bone

above the voices
above the flames

in the feather quiet

Why the parrot repeats human words 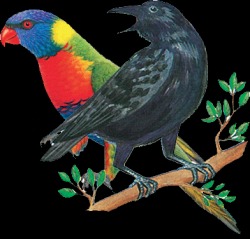 A theatrical presentation based on a Thai folktale that involves
storytelling, voice, clarinet, piano and dance. Provides some
revealing insight about human nature and explains why parrot
has replaced crow as the preferred human companion.
​

Rae and Tilly performed music and poetry including From the Bow at a dawn concert on Lake Laurentian in Sudbury, Ontario in 2008.  During the past twenty years, they have participated in many of R. Murray Schafer's multi-disciplinary works of the Patria Cycle.  For more information visit:  http://www.patria.org/

The solar collector is an architectural/engineering sculpture created by Gorbet Design and located in
Cambridge, Ontario.  It consists of 12 shafts positioned at different angles according to the seasons that
collects solar rays during the day, and can be programmed by anyone via the website
(http://www.solarcollector.ca) to perform a light show at dusk.


Marion, Rae and Tilly performed for the launch of the Solar Collector in 2008.
http://www.solarcollector.ca/press.php

Owen, Marion, Tilly and Rae collaborated with other artists in the debut performance of tranSpectra at the Open Ears Festival of Music and Sound in April 2009. An ensemble that performs music in an alternative musical scale, new compositions as well as new original instruments were premiered. For photos and a review by Karen Ages that was published in The Music Times, click on the link below: